The Jedleseer brewery was the first brewery in Floridsdorf, which was later merged with the breweries of the Mautner Markhof family. It was founded in 1787 by Anton Freiherr von Störck, Maria Theresa’s personal physician, after he had bought the estate with the associated manor house in 1778. Since, as a doctor, he probably knew about the health benefits of beer, he built the “Stately Brewhouse Jedlesee” at Prager Straße 84. In 1790 Josef Obergfell Freiherr von Grechtler acquired the property and with it the brewery, followed by further changes of ownership, which are not adequately documented.

In 1815, the brewery was taken over by Anton Bosch, the son of a Bavarian master brewer of Prince Oettingen-Wallerstein. Anton Bosch had come to Jedlesee for a year of apprenticeship, worked there as a servant, returned to Wallerstein to learn the brewing trade and then to be able to marry the daughter of Jakob Wohl, the operator of the Spitzer Inn* and then owner of the Jedlesee brewery. Bosch began to modernize the existing facilities, built a new brewhouse and a malt house, and the beers that were improved as a result soon enjoyed great popularity. The monthly production could also be increased from 800 to 10,000 buckets (approx. 6,400 hl). In 1823, he rebuilt the house at Prager Straße 84 in the classical style, and when the great flood destroyed the houses in Jedlesee in 1830, he saved hundreds of people’s lives by offering them protection on the upper floor of his home. He also helped the local population in many other ways and was granted in return by the emperor the exemption of customs duties to Vienna. In 1834, he employed 25 workers and in 1837/38 was the largest beer producer in the city with 112,000 buckets. Anton Bosch was also the first provost of Jedlesee from 1851 to 1853. When he died in 1868, his eldest grandson Anton (son of Bosch’s daughter Theresia and Johann Franz Dengler) had already taken over the brewery and modernized the facilities again.

Anton Dengler, married to the Munich brewery daughter Elisabeth Pschorr, led the company very successfully and turned it into a large industrial enterprise. In 1877, he built a storage cellar in Langenzersdorf, which was considered one of the largest in Europe.
In 1899, the brewery restaurant Gambrinus, named after the patron saint of beer brewers, opened next to the residential building in Prager Strasse 78 (houses number 80 and 82 were single-storey residential buildings for brewery employees). In 1900, his son Rudolf Dengler took over the brewery. Already in 1902, he had over 200 employees who produced 130,000 hl. In 1906, he bought the Magdalenenhof on Bisamberg and built a villa next to it in 1911, which his mother used as a retirement home.

In 1921 Jedlesee Brewery was converted into a stock corporation, which operated under the name Rudolf Dengler AG. In 1928/29, as a result of the global economic crisis, it finally merged with the United Breweries Schwechat, St. Marx, Simmering. After a share swap, it was shut down in 1930 and its main shareholder, Wolfgang Bosch, was given a seat on the board of the United Breweries in addition to a share package. He was the last descendant of another dynasty of brewers who had been, together with the related Dengler family, active in Jedlesee for more than 100 years.

In 1978 the old house at Prager Straße 84 and the houses number 82 and 80, which were formerly part of the brewery, were demolished; they were last owned by the Lutzky & Co. glass factory. In 1980 the beer storage cellar followed. House number 78 is the last remnant of the Jedleseer brewery. 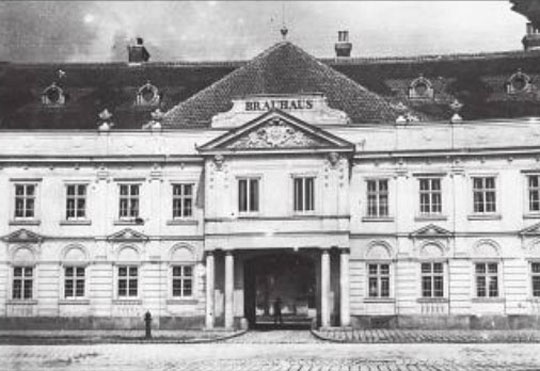 *The first floor of the Spitzer Inn provided a shelter for the neighbors if the Danube overflowed its banks again. From 1887 the hostelry also served as the parish hall of the local parish of Floridsdorf and, from 1894 to 1901, of the large parish of Floridsdorf, which – like the imperial capital Vienna – was still in Lower Austria. At the beginning of the 20th century, however, there were suddenly bigger plans for Floridsdorf. Should Vienna, as intended, be placed directly under the emperor and thus be separated from Lower Austria, then Floridsdorf should become the new capital of Lower Austria. Since a future state capital naturally also needs a representative town hall, the old inn was razed and today’s district office was built between 1901 and 1903 under Floridsdorf’s mayor Anton Anderer (1857 – 1936). The four-story Floridsdorf town hall in the baroque-classical style based on the award-winning design by the architects Josef and Anton Drexler originally had a clock tower that was visible from afar, which was destroyed by bombs in the Second World War and was never rebuilt afterwards. Small shops and restaurants in the ground floor zone should remind the inn that once stood here.

Manfred I. and the “Karl Schranz Affair”
Scroll to top