In 1855, she married as second daughter from the marriage Mautner-Kadisch the lawyer Dr. Anton Philip Willner (1827 – 1887), born in Gröschlmaut in the parish of Paulitz in South Moravia, where his ancestors already have settled in the 17th century. Anton’s sister, married Stauffer, was the mother of the busy Viennese painter Viktor Stauffer (1852 – 1934). Art historians report on some of his portraits, for example of members of the imperial family or of Count Hanns Wilczek (1837 – 1922), well known as a patron. The family also keeps a life-size portrait of Editha Mautner von Markhof, née Sunstenau von Schützenthal, painted by Stauffer.

In March of 1848, Anton, as an eloquent young student, was walking at the forefront of his colleagues, leading the memorable revolution that began then. After urgent speeches in front of the Landhaus in Vienna`s Herrengasse, the angry crowd forced the resignation of Chancellor Prince Metternich and the transition to a more democratic government. Soon afterwards Anton began to practice the profession of a lawyer, which he could also combine with advising various banking institutions. At that time, he was entitled to the honorary professional title of court and court lawyer.

After the opening of the new central cemetery outside Simmering in 1874, he acquired the crypt for his own family near the magnificent Mautner crypt.

From and for the descendants of Maria & Anton Willner 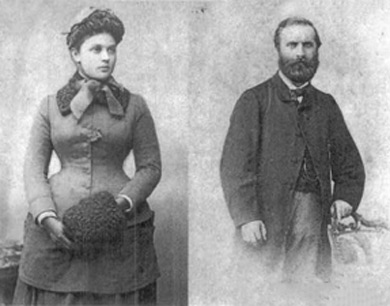 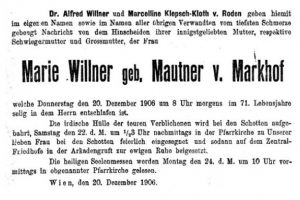