An important Viennese institution and its history

Adolf lgnaz and Julie Marcelline von Mautner Markhof had devoted themselves extensively to charity and to the foundation of retirement homes, kindergartens and orphanages until the end of their lives, and in 1872, as a highlight, they founded the children’s hospital in the Landstraße district of Vienna.

By letter of November 7, 1872 to the municipal district representation of the 3rd district of Vienna, they jointly donated the amount of 150,000 guilders to the City of Vienna for the “construction of a children’s hospital in this district, with the condition attached to this dedication that the children’s hospital to be built should be accessible to all residents of the district without distinction of religion”. Such a condition was a sensation for the time! At the same time, it was announced that the ten children of the donor couple dedicated a total of 60,000 guilders to the maintenance of ten hospital beds, and the entire hospital laundry was also financed. When difficulties arose with the acquisition of a suitable building site, Adolf Ignaz donated three plots in Kleingasse to the project. Thus, the construction could finally be carried out by the master builder Heinrich Stein, according to the plans of Eduard Kuschée.

After completion of the building, it was then handed over to the representative of the III. district Landstraße on July 1, 1875 and given the title “Crown Prince Rudolf Children’s Hospital in the III. Vienna Municipal District“. The commissioning took place on September 20, of the same year. It was also agreed “that the incorporation of the ownership title of the hospital building in the Austrian land register would at the same time signify that the same may not be used for any purpose other than that for which it was dedicated”.

After the death of Adolf Ignaz, his son Carl Ferdinand took over the representation of the founder’s family in the administrative committee instead of his father. In 1891, together with his wife Editha, he provided the means both for the construction of the Elisabeth Chapel (by the architects Joseph Freiherr von Wieser and Franz von Gruber) at Kleingasse 3 and for the construction of the Archduchess Elisabeth Isolating Pavilion (for eight children suffering from scarlet fever). Both were named after the then 8-year-old Crown Prince’s daughter. Baron von Wieser (1853 – 1918), who was also responsible for the interior of the chapel, was a brother of Carl Ferdinand’s son-in-law Leopold. First intended for the sisters of the Order of St. Vincent de Paul (and from 1894 the sisters of the Congregation of the “Daughters of the Divine Saviour”) working in the hospital at that time and for hospital pastoral care or for emergency baptisms, it also developed over the years into a traditional place of worship for the inhabitants of surrounding quarters due to its separate street access. On October 12, 1891, Carl Ferdinand and his wife Editha issued the document of dedication and donation, in which it is also stated that a Holy Mass is to be read daily in the above-mentioned chapel, which is to be guaranteed by restriction on transferability. There is also the remark that masses should be read as commemorative masses on the following days:

“On the birthday of His Majesty the Emperor Franz Joseph I., on the day of the death of His Imperial and Royal Highness Rudolf, Crown Prince of Austria. On the birthday of Her Imperial and Royal Highness the Crown Prince’s daughter Archduchess Elisabeth and on June 27, each year a memorial mass for the deceased first founders of the Children’s Hospital, Mr Adolf lgnaz Ritter Mautner von Markhof and Ms Julie Marcelline Mautner von Markhof.”

In the annual report of the hospital for 1891, the cost of the chapel is estimated at 27,372.60 guilders, of which 3,135.20 guilders were spent on the interior. If one tries a conversion to today’s amounts, one comes to far more than 360,000 €. A memorial writing by several authors “100 years of St. Elisabeth´s Chapel 1891 – 1991” explains the history, use and interior design of the church. It should be noted that the chapel was restored to its former glory in memory of its founders. Adolf lgnaz, Julie Marcelline and Carl Ferdinand were depicted in the side windows, and the coats of arms of Crown Prince Rudolf and the Mautner von Markhof and Sunstenau von Schützenthal families were shown inside.

Further foundations and extensions of the hospital followed in 1894, when Behring developed a healing serum for combating diphtheria and a special pavilion was built.

After the death of Carl Ferdinand (1896), his son Victor continued the foundation and donated an X-ray machine to the hospital in 1902 – only six years after Röntgen’s discovery. Together with his siblings, he also handed over a land property directly adjacent to the hospital. On July 1, 1903, the “Kaiser Franz Joseph Government Anniversary Isolating Pavilion” was officially opened, which had also been built according to plans by Gruber (master builder Karl Hörmann). On the occasion of the 60th anniversary of the reign of Franz Joseph I (1908), Victor Ritter Mautner von Markhof donated 100,000 Crowns which (with further donations from third parties) were used for a new ambulance building, which was officially opened in November 1910 (built by master builder Albrecht Michler according to plans by Franz Berger, Director of Regional Construction).

According to the Vienna Magistrate’s note of September 4, 1921, the name “Kronprinz Rudolf-Kinderspital-Stiftung” was changed to “Mautner Markhof´sches Kinderspital” with the approval of the Vienna Magistrate. As a result of inflation, the foundation ran into financial difficulties and so the Administrative Committee asked the Municipality of Vienna to start negotiations on June 4, 1924 with a view to transferring ownership to the City of Vienna. On the basis of the decision of the Vienna Municipal Council of January 30, 1925, the Municipality of Vienna thus took over the entire movable and immovable property of the Mautner Markhof Foundation into the limited property of the City of Vienna, which had been incorporated as a real estate. 1929 – 1937 Prof. Dr. Hans Salzer, an outstanding medical personality, managed the hospital (until then he had been Primarius of the Surgical Department of the General Polyclinic). His sister Maria Salzer, a registered nurse, was the adopted daughter of Ludwig Wittgenstein, who bought Bellevue Castle from the City of Vienna in 1921 and agreed to bear the costs of operating it as a tuberculosis ward. The hospital did not suffer any war damage. In the 1950s, the hospital was renovated.

Despite years of intensive efforts, especially by the family and Primarius Dr. Walter Potacs, to preserve the legacy of Adolf Ignaz, it was closed a few years after the construction of the Social Medical Center East / SMZ-Ost on December 16, 1998.

Until mid-2000, the building was used as an accommodation for refugees from Kosovo. On June 27, 2001, the municipal council approved the sale of the property to a consortium of bidders for around 5.09 million €. The successor building to the hospital demolished in 2002/2003, built by the Coop Himmelb(l)au architectural office, houses the trade union of private employees, printing, journalism on five floors and the Vocational Training Institute on three floors. The relief created by Carl Kundmann – showing a doctor treating a child – served as an ornament to the entrance in Baumgasse. Today it is attached to a pillar of the new building. Since the end of April 2008, a commemorative plaque is placed above the niche below the relief, providing information about its meaning and purpose at this location. 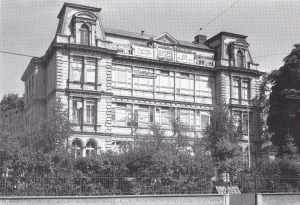 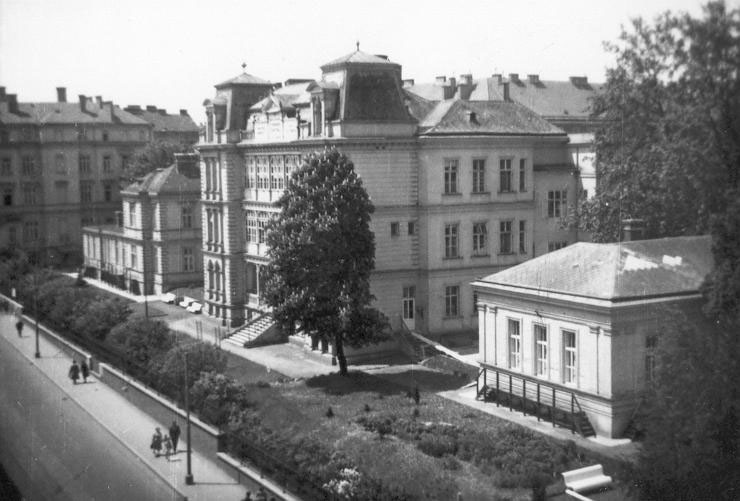 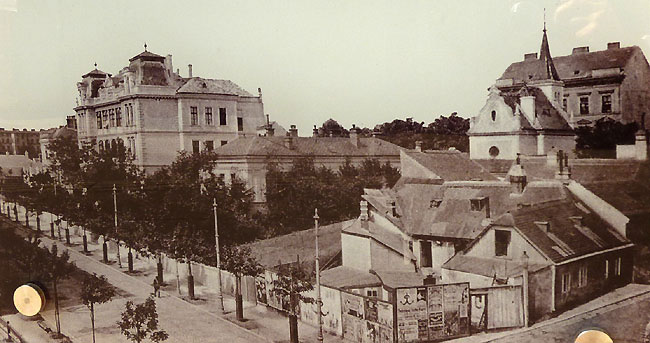 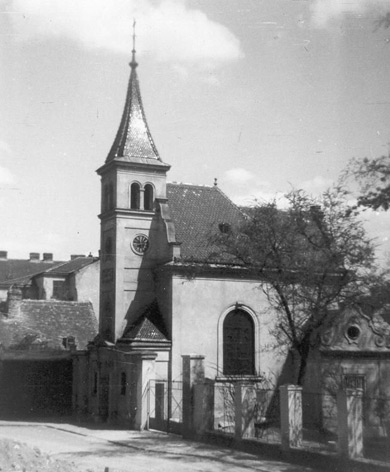 Window in the Elisabeth Chapel with the images of Adolf Ignaz / Julie Marcelline and St. Adolphus / St. Julia (© Alfred Paleczny) 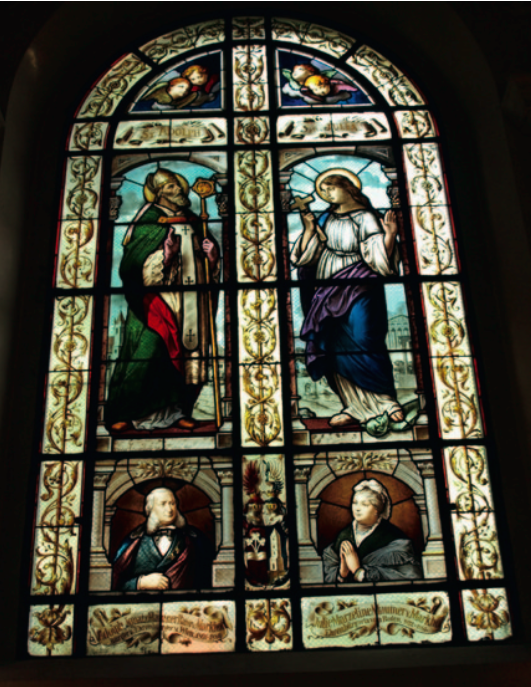 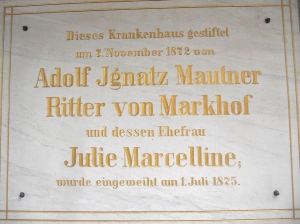 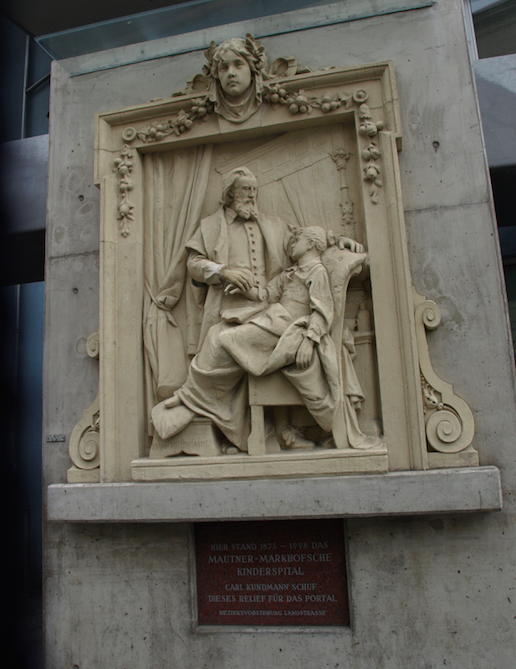