In 1839 Adolf lgnaz Mautner leased the St. Marx brewery and there he started first attempts to produce industrial yeast. In 1864 the Preßhefe-, Spiritus-Fabrik und Raffinerie (pressed yeast, spirit factory and refinery) was founded in Floridsdorf near Vienna. In 1865 the later “Mautner Markhof and Wolfrum estates” in Simmering were purchased. Companies in St. Marx, Floridsdorf, Simmering and Hodonín were already operating in 1900. In 1925 the “Vereinigten Mautner Markhof’schen Preßhefefabriken KG” was founded.

The family company Wolfrum has its origins in Preßnitz near Dresden (from 1876 Schönpriesen), where the Eckelmann spirit, compressed yeast and liqueur factory was founded in 1847. From 1869 Wilhelm Wolfrum expanded the business together with Rudolf Eckelmann and in 1895 a family corporation was established, which was converted into a limited company in 1906 under the direction of Fritz Wolfrum, a grandson of the company founder. As early as in 1903 Fritz Wolfrum had taken over the liquor, yeast and liqueur factory in Aussig-Schönpriesen, primarily with money from his father, the industrialist and president of the board of directors of the Aussig-Teplitz railway company, Carl Friedrich. In 1911 he was awarded the Commander’s Cross of the Franz Josef Order for his economic achievements. In 1912 he also took over the spirit, pressed yeast and liqueur factory in Teplitz-Schönau. In World War I he served as a reserve officer at the front and was awarded the Military Merit Cross with Swords, the Signum Laudis in silver and bronze and the Karl Troop Cross. The spirit and pressed yeast factory in Vienna-Stadlau was founded by Geza Schönberg in 1911 and registered in the district court of Floridsdorf in 1912 under the name “Pressed yeast, spirit and malt factory, owner Geza Schönberg, Vienna 21, Stadlauerstraße 64”. On July 1, 1918, that company was also transferred to Fritz Wolfrum, who expanded the location into a modern factory. The famous specialty “Ein Klostergeheimnis” was also produced there. From 1/7/1919 the company was run as a stock corporation and converted into a limited partnership in May 1939. In 1945 due to the Central European collapse, the Wolfrum family did not only lose the companies in Aussig-Schönpriesen, Teplitz and Großpriesen an der Elbe (the majority of shares had been acquired in 1925), but also the company in Vienna Stadlau which went to the Russian occupation forces and became a USIA company. In 1955, as part of the State Treaty, the company was transferred to the Austrian state and the Ministry of Finance appointed Otto Carl Wolfrum as acting administrator for the family. Mautner Markhof also showed interest in the company as early as in 1955, but the new Austrian Republic strived to return it to the primarily owners. Thus, on January 1st, 1956, the Stadlauer compressed yeast, spirit and malt factory returned to the ownership of the Wolfrum family, who had to pay the Austrian Republic a transfer fee of USD 1 million (granted as an interest-free loan). This loan could be repaid within ten years.

Mautner Markhof (with the production facilities in Floridsdorf and Simmering) and Wolfrum (Stadlau) remained competitors until August 31, 1970. Both produced yeast, alcohol, and spirits. Mautner Markhof, the undisputed number 1 in Austria in the yeast sector, earned more per kilo of yeast than Wolfrum due to the latest equipment and technologies. Alcohol production was regulated by a state quota, with Mautner Markhof number 2 with 17 % and Wolfrum number 6 with 8 %.

On September 1, 1970, the united pressed yeast factories of Mautner Markhof merged with the spirits, pressed yeast and liqueur factories of Wolfrum to form the “Vereinigte Hefefabriken Mautner Markhof & Wolfrum KG”. All production facilities were merged in Vienna-Simmering. In the yeast sector they were still number 1 and in the alcohol sector number 2, but with a much smaller gap to the top. In 1976 the company was converted into a stock corporation and in 1978 into a GesmbH (limited company).

In 1979 “Mautner Mautner Markhof Nahrungs- und Genussmittel Beteiligungsgesellschaft Aktiengesellschaft” was launched. This joint stock company acted as a management holding company for the United Yeast Factories and TH & G Mautner Markhof. All shareholders of both companies contributed their shares, but the companies themselves continued to exist as separate legal entities. The Wolfrum group of shareholders (20 %) was represented in the management by Otto Wilhelm Wolfrum, who was also subsequently a member of the board of directors, chairman of the supervisory board and ordinary shareholder.

In 1983 after the takeover of JUrany & WOlfrum GesmbH (leading and unrivaled in the dairy equipment sector since 1904), the company was finally renamed in “Mautner Markhof and Wolfrum Gesellschaft m. b. H.” in 1984. With the continuation of the JUWO brand as a separate department, the Austrian dairy industry, the entire food industry, the chemical and pharmaceutical industry and bakeries were supplied with a first-class machine trading program. Some of the machines and devices were produced in-house, and some were sold as commercial goods.

The “Yeast Groupement” was founded by Georg III Buwa in 1945, immediately after the war. It acted as the umbrella organization of the largest yeast producers in each country and was operating until the EU accession. From 1983 Otto Wilhelm Wolfrum was Secretary General of that organization, and since he also had excellent contacts to Hungary as the export manager of the limited company. It was he who initiated, and drove on the business contact with Buszesz.

In 1991/1992 Buszesz R. T. (AG) in Budapest, the monopoly holder for yeast and vinegar in Hungary, was taken over. Buszesz was a reflection of the Simmering companies, but with 33,000 tons of yeast/year compared to Simmering’s 18,000 tons/year, far more productive. Vinegar production was also state-of-the-art. The aim of this purchase was to conquer the Eastern European market

Since the market situation had changed significantly with Austria’s entry into the EU in 1995 and Lesaffre, the world’s largest yeast producer, got free access to the Austrian market, Georg IV J. E. began sales negotiations in 2000. Thus, in 2002 all yeast activities of Mautner Markhof, Wolfrum and Buszesz were sold to the French family business.

The yeast producing companies in Austria

were united in an officially approved quota cartel, which enabled the yeast to be delivered to every single Austrian baker. The price – approved by the Joint Commission – was able to be kept low due to the elimination of intermediate trade and expensive advertising effort.

Mautner Markhof and Wolfrum limited company produced yeast, spirit as well as baking and confectionery products and had two hundred and seventy-eight employees as of 1.1.1987. It had an extensive, close-knit fresh produce delivery system that stretched seamlessly across Austria. Every baker, confectioner, restaurant etc. was supplied with the freshest products from the yeast and baking agent range once or twice a week according to a meticulously elaborated tour plan. Many products were also exported to Germany, Switzerland, England, the USA, Africa and the Far East. A model bakery and pastry shop with all the equipment and working conditions that were found in modern Austrian companies, was opened at the beginning of 1984. It was intended for holding baking demonstrations, training courses and seminars as well as for quality control for production and product development. With ÖBASYST, a comprehensive program package was sponsored and developed for the first time together with the federal bakers guild, which represented an integrated solution for the entire internal organization of the bakeries. It comprised standardized software programs for ordering, delivery notes, invoices, materials management, time and material control, driver and branch accounting, statistics, calculations, financial accounting and manager information. 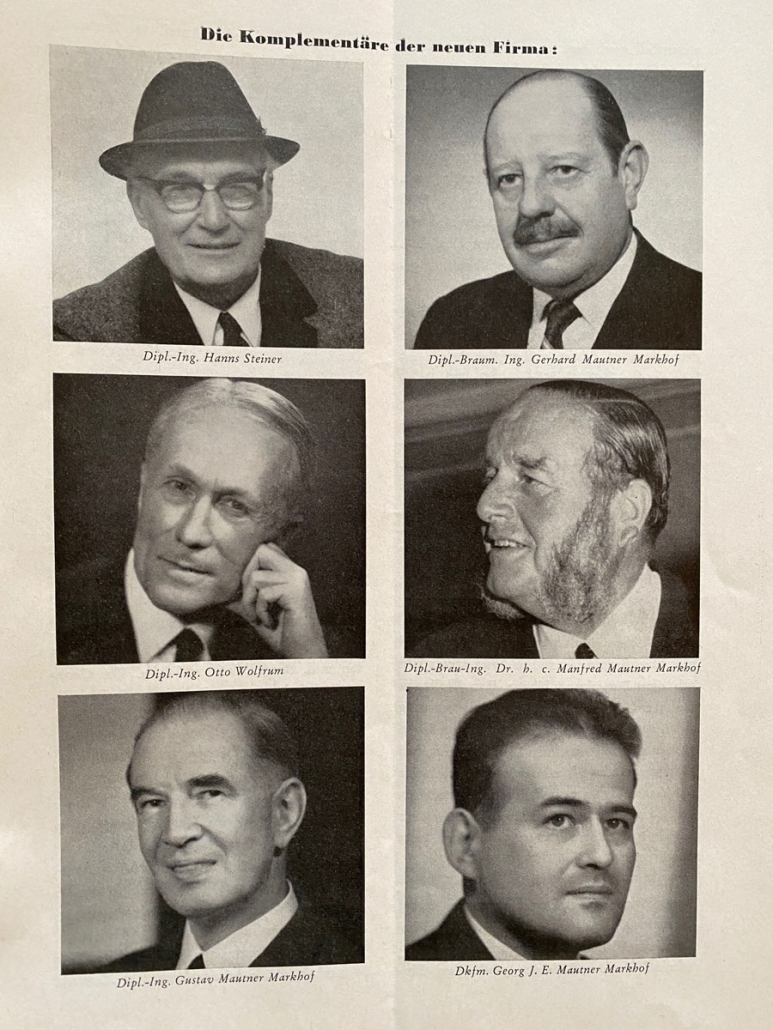 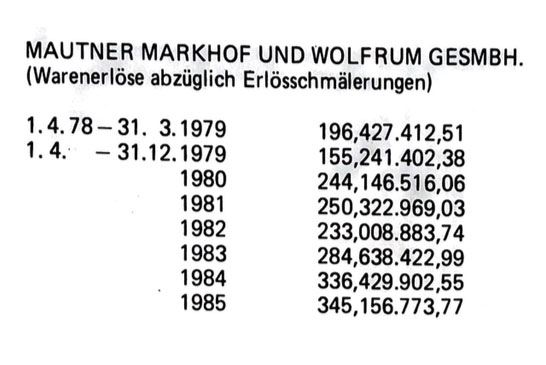