He was born in Steinfeld near Graz as the grandson of Johann Peter and Therese von Reininghaus and son of Johann Dietrich “Hans” von Reininghaus and Virginia “Gina” Agujari (who later married Franz Conrad von Hötzendorf). He passed his matriculation examination at the Theresian Academy in 1914, five weeks before the outbreak of World War I, and then volunteered for the Italian front. Returning home as an honoured lieutenant in January 1918, he enrolled in physics, chemistry and philosophy at the Philosophical Faculty in Graz that same year. After his dissertation on “The electromotive behaviour of alloys of sodium with some other metals” had been approved, he received his doctorate in May 1920 and married Countess Anna “Nini” von Widmann-Sedlnitzky in October, with whom he had the children Anton “Tono”, Peter and Theresia “Mädi” (married Baroness von Löwenthal-Maroicic).

Also in autumn 1920, Peter Reininghaus joined the Brothers Reininghaus AG as an authorized signatory. With almost inexhaustible energy, he took responsibility for this very difficult legacy after the war. From 1924 on he was a member of the board of directors, which he headed as executive president from 1937 onwards. It was him who led the company out of the difficulties of the post-war period with its loss of the large economic area of ​​the Danubian Monarchy. In 1927, he joined the Styrian section committee of the association of industrialists and in 1935 became chairman of the Styrian regional association. In 1934, he took on a political mandate as a member of the Styrian state parliament. In 1936, he was appointed to the General Council of the Austrian National Bank. In the mid-1930s he also succeeded in linking his brewery with the second largest brewery in the country, the Gösser Brewery AG, which turned out to be the focus of his life’s work. Thus, he laid the foundation for the “Styrian brewing industry”.

Immediately after Austria’s annexation to the Third Reich, he was dismissed without notice and relieved of all public mandates, arrested on March 13, 1938 and only released twelve days later. Without further proceedings, he was expelled from the country.

He finally emigrated via Baden/Vienna, Brussels and Lausanne with his second wife Nora Ebner v. Ebenthal and his youngest son Peter, who was 14 years old at that time, went to Trieste and Abbazia. He was penniless because getting the exit papers had cost him everything. During his time in exile, he educated himself by learning Italian and English, Goethe’s Faust by heart and studied the works of German and French philosophers. Immediately after July 20, 1944, he received a summons from the Gestapo, but was warned so that he could go into hiding and wait in attics and basements for the war to end. In 1945, when he returned home for the first time in seven years, the material and human rubble left by the war made him resign at first. It was only after a long hesitation that he went back to work and began to rebuild the company, which was now called “Grazer Brauerei Aktiengesellschaft Puntigam-Reininghaus” (the result of a forced merger of the two Graz breweries in 1944). Large parts of Graz were only ruins, hunger and misery dominated everyday life and Steinfeld had been razed to the ground by air raids. Therefore, in 1947, the entire beer production was relocated to Puntigam, which enabled efficient management. He took care of the reactivation of the production facilities and the management of the Brothers Reininghaus Brewery AG, which includes Reininghaus and Puntigam, the Göß brewery, whose supervisory board chairman he became in 1951, and the Villacher Brewery.

In 1950 Peter Reininghaus founded the Association of Independent Business Owners as a forum for free decision-making and equally free criticism … as a bulwark of bourgeois sentiments. He was a founding member of the “New Austrian Society” led by the head of the government of Styria Josef Krainer senior, who stood up for a federal Austria against the hypertrophic Viennese orders, against the system of economic nepotism. In his house on the Steinfeld he ran a salon for politicians and those interested in politics, but not for party politics. He was also a great promoter of Styrian hops. On his initiative in 1953, farmers were won in the Leutschach area to start growing hops – and thus with the Styrian brewing industry being rooted in the local soil. According to legend, he is said to have received the first hop plants in exchange for two bulls and a Streirer tractor from neighboring Slovenia. Of the first hundred hop farmers, thirteen are still cultivating on around 100 hectares in the southern Styrian border region. They ensure that the Reininghaus „Jahrgangspils“ has remained unique in Europe thanks to its distinctive taste. Peter I. has also got involved in the reorganization of the brewing cartel association and from 1957 coordinated the breweries in Styria and Carinthia with the help of the “Alpine Working Group for Economic Policy” he had created. Internationally, he organized the establishment of the “Chamber for the Promotion of Traffic between Austria and Trieste”, for which the Italian state later awarded him the insignia and the title of Commendatore.

His various talents can be traced back to the sober business sense of his fathers and the intuitive and instinctive-ingenious actions of his highly gifted and artistically inclined Italian mother (descended from the old Venetian families Marchese Tassoni and Nobile di Tretti).

“The President” was an extremely musical and correspondingly sensitive and delicate person with a strong sense of form and rhythm. He was a brilliant pianist, and when he gave house music evenings with instrumental artists and singers from the Graz Opera, he gave excellent accompaniment on the piano.

His oral and written style reflected the joy of mastering language. From 1954 until his death he was on the board of directors of the Styrian Music Association, member of the board of trustees of the Joanneum and was also prepared to make personal material sacrifices to save the Graz theatre. This also in memory of the deep friendship that his grandparents had with the Styrian poet Peter Rosegger.

Over the years, the spirit of the time and the political masquerade appeared increasingly strange to him. At his last public appearance, in December 1972 in the Styrian Chamber of Commerce, he made a passionate appeal against the ever more palpable tendencies towards equalization and levelling and therefore he called upon people for actively oppose it.

His official cause of death was heart failure, but it was more the extinction of the once strong will to live. So, he died on a Sunday morning, like all great Austrians as a pessimist, as a man whose ultimate fulfilment is denied, as it was said in an obituary. With Dr. Peter Reininghaus went a committed full-blooded entrepreneur and Austrian wholeheartedly, and with his death those tendencies of equalization and of levelling continued, which he always had opposed. 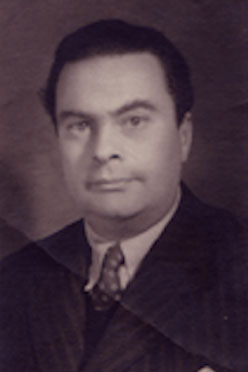 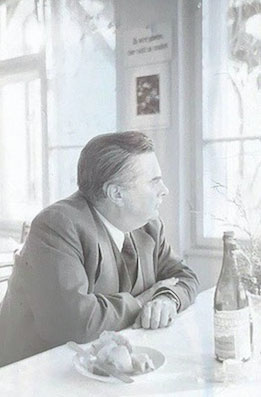