A fateful combination – Archduke Franz Ferdinand of Austria-Este and Brioni

1906 was a particularly important year for the “tourism advertising” of Brioni. In the spring of that year, Archduchess Maria Josepha spent three weeks on Brioni, which played a vital role in the stability of her health. She was the first high-ranking guest from the Viennese court and did not miss to spread the reputation of the island in the capital of the monarchy as a climatic health resort. Despite the modest accommodation in the Hotel “Neptune I”, located among the working quarters (above the rambling wine cellar, in the immediate vicinity of stables and huts) and where she stayed until the luxurious “Neptune II” was built, the Archduchess remained faithful to the island until the First World War and was regarded as the patron of Brioni for her merits in promoting the spa.

According to Paul Kupelwieser, Franz Ferdinand visited Brioni for the first time in mid-July 1908, but the local newspaper did not confirm that. In July 1909, the heir to the throne and his wife Sophie, Duchess of Hohenberg went on a several-day cruise along the Adriatic coast on the yacht “Miramar”. Their trip led them via Šibenik, Dubrovnik, Makarska, Omiš, Split and Trogir also to Brioni. At that time, accompanied by Carl Kupelwieser, they made a car tour, informed themselves about the restaurant and hotel establishment and visited antique and medieval monuments, which Anton Gnirs, a German-Bohemian archaeologist, had been commissioned to explore and excavate. At that time, the heir to the throne decided to return at a suitable occasion. During his stay on the island a coat of arms from Omiš was given to him by Carl Kupelwieser as a present. On his arrival in Omiš, however, he asked the mayor not to remove cultural monuments and art objects from their place of origin, to renovate old buildings carefully and according to original plans, and to maintain regional characteristics. That view, which is profoundly justified from a modern point of view, even in those days came up to today’s recommendations for the protection of cultural heritage, but was severly attacked by the Italian irredentist press.

In February 1910, the Archduke spent two spring months with his family on Brioni, which finally consolidated the island’s reputation as an elitist holiday destination, as each extended visit by members of the imperial family aroused enormous public interest. Despite those extraordinarily good prospects for the future, the island administration was aware of the fact that Brioni’s future could only lie in environmentally friendly, “green” tourism for everyone according to the newspaper of the island. Franz Ferdinand, heir to the throne after all, and his family were also content with simple accommodation in the “Carmen” hotel, where he occupied the first floor. The fact that even he had chosen Brioni as his holiday destination despite the still modest accommodation options at the time played a major role in the further development of tourism in the destination. The Archduke was generally regarded as a gloomy, rather unapproachable man, but when you saw him in that environment with his beautiful wife, the Duchess of Hohenberg, and the three lovely children, you got the impression of a complete happy family life. From that time on until 1914 he regularly spent several weeks in spring on the island.

During his first nine-week stay in 1910, he visited Roman excavations not only on the Istrian mainland, in Valbandon and Pula, but also on Brioni, accompanied by Professor Gnirs, whose activities he greatly appreciated and supported. He was very interested in the archaeological places of the villas and baths of ancient Rome, and it was worthwhile to carry out extensive excavations where some columns of “vanished splendour” could still be seen. Satisfied with the results, he thanked Gnirs in a letter, which he had published in the bulletin of the “Zentralkommission für Denkmalschutz” (Central Commission for the Preservation of Monuments), which was under his patronage. He tried to raise public awareness regarding the need to preserve the cultural heritage. In fact, much had been excavated on Brioni over the years. All the means which they had at their disposal were very limited at the beginning and the excavations progressed slowly due to lack of personnel. All the guests loved to watch that work, which usually only took place on Sundays. It was fun to be there when small objects such as tear bottles, lamps, bronze statuettes, fragments of amphorae and many more came to light. Those who were lucky and knew the researcher could leave with a Roman coin. Due to the archduke’s interest, the work could soon be continued at an accelerated pace, and Prof. Gnirs was appointed to the Istrian provincial curator.

The Austrian heir to the throne, like so many others, had been fascinated by Brioni, and he wanted to buy part of the island. There he found ideal holiday conditions and could indulge in his passion for archaeology, for the protection of historical monuments and for gardening. Especially advantageous was, of course, the proximity of the naval port Pula, which was easy to reach. Although he owned several estates and some hunting grounds (Konopiště, Chlumetz, Eckartsau, Blühnbach, Lölling), he liked Paul Kupelwieser’s gem so much that he wanted to buy 20 acres of land in the southern part for 250,000 crowns. But Kupelwieser, himself king in his small empire and not willing to give up his autocracy, also knew that the purchase price would rise in a few years and did not agree. According to the lawyer of the court nurseries, the value of the island was about 30 – 35 million crowns. Thus, the heir to the throne tried to reach his goal in every conceivable way: He began to cite security reasons and fear of espionage because of the presence of guests from all over the world as reasons for the intended purchase. Allegedly, the government or the navy should buy the island, in that case it would only have been possible for the heir to the throne and his family to stay on it and the hotels and villas would have been transformed into hospitals. The newspapers had reported about it since 1910 again and again. For example, one could read in the island newspaper that the fear of espionage would be completely inappropriate, as it was much easier to keep control over foreign guests on an island than on the coastal area. Furthermore, it was emphasized that Austria would benefit from the development of tourism on Brioni and not the other way round. Because of the claims of the heir to the throne, which had caused indignation in public, Kupelwieser was under constant pressure and the negotiations dragged on endlessly, because Franz Ferdinand just did not want to accept the owner’s negative attitude.

Franz Ferdinand’s passion for Brioni, however, also caused many highlights. For example, the year 1912 witnessed a great event – the visit of Emperor Wilhelm, who had responded to the Archduke’s request to meet him on the island. The sky was bright, a light Bora blew and let the sea appear as bright blue as only the Adriatic could be! The unforgettable view, when the snow-white Hohenzollern came into sight with the imperial guest on board, awaited by the battleships of the Austrian Navy, which had taken up position in the Fažana Strait and, one after the other, fired their salute shots. From the carpet-covered Molo of Brioni, on which Archduke Franz Ferdinand and his entourage stood, the Admiral’s longboat cast off and went alongside. After the official greeting, the hotel guests forming a guard of honour along the Riva enjoyed the pleasure of seeing the noblemen passing by right next to.

But the day came when the “Austrian Dreadnought” (cruiser) Viribus Unitis arrived majestically, coming from Triest, in the Fažana Strait. One could see the Admiral´s flag fluttering, and one knew, on board was the supreme fleet commander, Archduke Franz Ferdinand, with his wife on the journey to Sarajevo. The cruiser slowed down, a longboat left the ship and went over to Brioni to pick up the two Princes of Württemberg who were staying there for a cure. As Franz Ferdinand’s nephews, they had been invited by him for a brief welcome on board. The two young men returned enthusiastically from their visit and told Dr. Otto Lenz, whose treatment they were under, that their uncle had promised them to have them on board on his return journey and to take them with him to Triest. What was return voyage like a few days later! The catastrophe in Sarajevo had taken place. The Viribus Unitis returned – sailing slowly, flag at half-mast. She carried two coffins on board, and at the Molo of Brioni there were two young princes standing and weeping.

Among other things summarized and shortened from the source: Mira Pavletic: “The World of Maria Lenz”, translated by Elke Vujica

Arrival of the heir to the throne with family, Paul Kupelwieser to his left 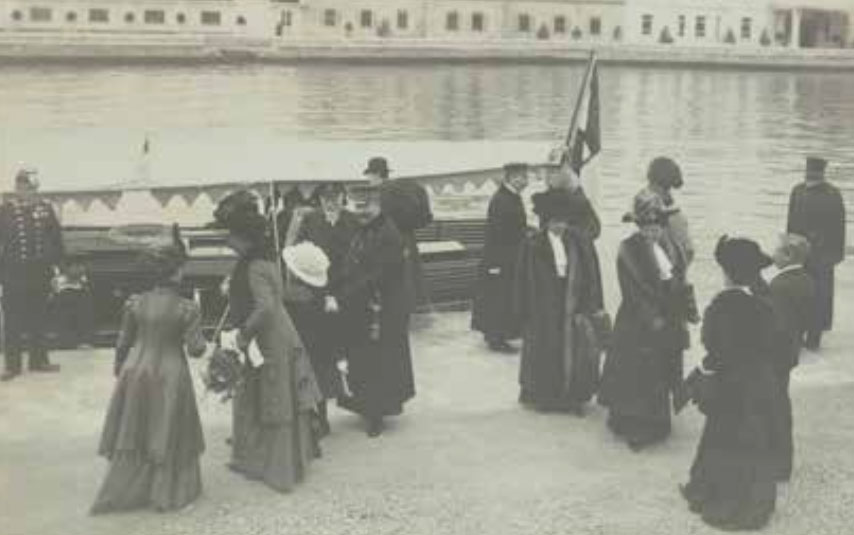 The German Kaiser Wilhelm, heir to the throne Franz Ferdinand and Carl Hagenbeck in front of the ostrich farm 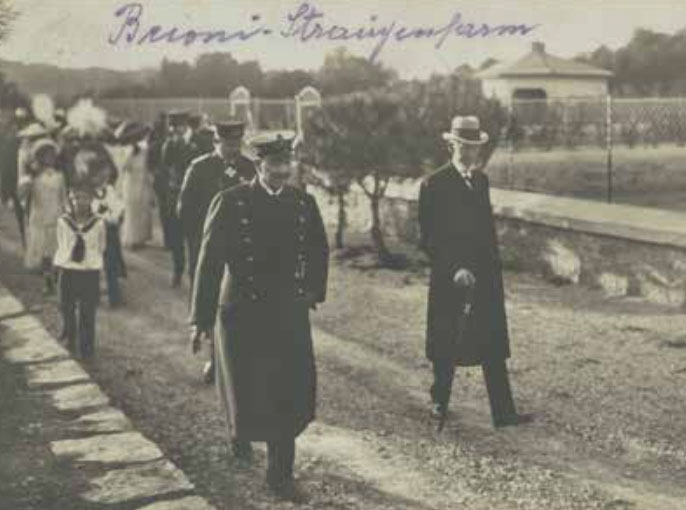 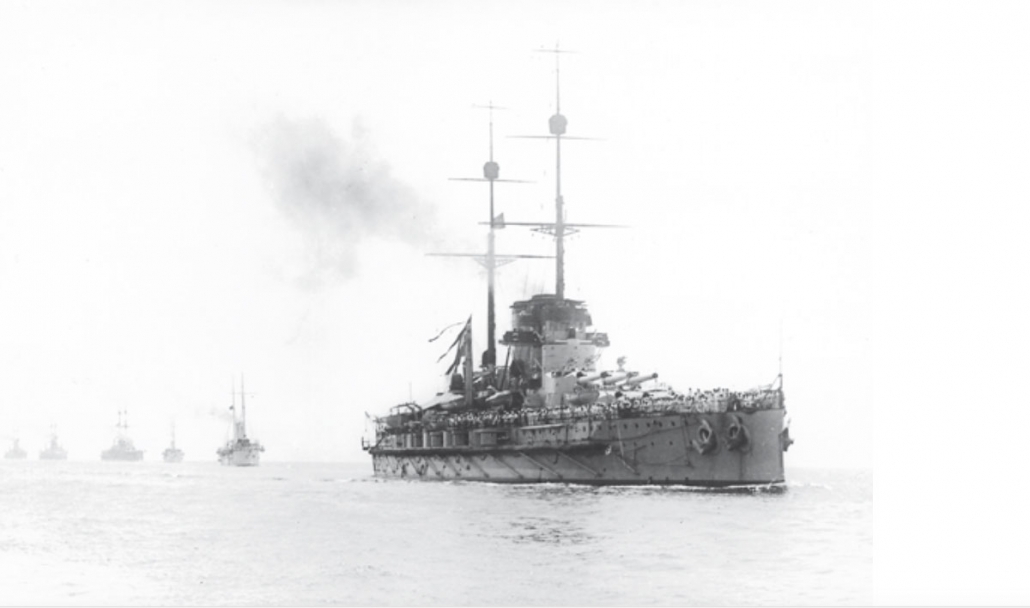