Richard Strauss had helped Manfred I. considerably by intervening with Goebbels. With the handed-down words: “He is a friend, it must be a mistake”, he got him out of the Gestapo prison. And in return, the latter then hid Richard Strauss’ grandson Richard, whose mother was Jewish, in the Simmering factory disguised as a worker. In this way, a friendly relationship between the families was maintained until the next generation, because it was precisely this Richard, who, in turn, entrusted me in the 1980s with his daughter Madelaine’s entry into the advertising business.

The following letter is preserved in handwriting and describes in a moving way the desperate mood Richard Strauss was in during the winter of 1944.

After a lot of worrying and anxiety and your, unfortunately all too justified, concerns, Christian finally arrived here happily with the good Martin and reported how lovingly you and the dear Pussy have taken care of my homeless children. Many thanks also from the very desperate Pauline! In my destroyed life, the family now is the last and only ray of hope (I especially thank you for taking Richard into your care, even though I thought about his future a little differently). I hear with great regret that many bad things have already happened to you. Hopefully at least your beautiful new home will be preserved, even if I have to say goodbye to the happy hours there forever.

Maybe you will come back here again, where we could (for the time being!) play a Skat as a memory. In the house next door, I can even offer a small picture gallery (a very beautifully preserved Madonna from Northern Italy and a very exceptional piazetta), in the house I can present a new arrangement of the “Rosencavalier waltz“, which the dear Philharmonic Orchestra will play at my forthcoming funeral, so that I don’t enter the waltz heaven too sadly to join my name mates. Because my life has been over since August 16th. My life’s work has been destroyed, the German opera destroyed, German music banished to the inferno of the machine, where its tortured soul suffers a sad, miserable existence, my dear, beautiful little house, of which I was so proud, destroyed.

I will never see or hear my works again in this world – I wanted Mozart and Schubert had taken me to their Elysium at the age of 80, I could have brought Gluck the beautiful bust. Well, let’s forget about it! Forget it all! Now I only hope that my incorrigibly optimistic children with healthy skin will come out of the horror of poor beautiful dear Vienna. We have already prepared everything for their welcome: whatever furniture and household items they´ll bring with them will be stored. I am trying to accomplish things with the help of military relations, which, thanks to the good General Schubert (whom I wrote a letter of thanks yesterday), has proven to be the only feasible option to find a second furniture van, and also to continue to prepare the grounds here for “racial defilers” and “hybrids”!1

Tomorrow I will find out more details, and I will also try to have a spare hut built, perhaps also with help of the Wehrmacht. In any case, the children can get into a warm bed as soon as possible, where Christian already feels very comfortable. Please show this letter to Bubi – I can’t write everything again. I will only give you a message when I have something new to report. My poor wife has calmed down a bit now too. Greet me warmly the whole dear Mautner house together with the honored parents and the always cheerful “with me”! and dear poor Böhm – how often do I think of him and his beautiful Strauss week!

Gone – gone it says in the Capriccio!

In old faithfulness, your
Richard Strauss

1 Strauss alludes to the fact that his son Franz is married to the Jewess Alice, whose son Richard was considered a Jewish half-breed according to the racial ideology of the NS since the Nuremberg Laws (1935). 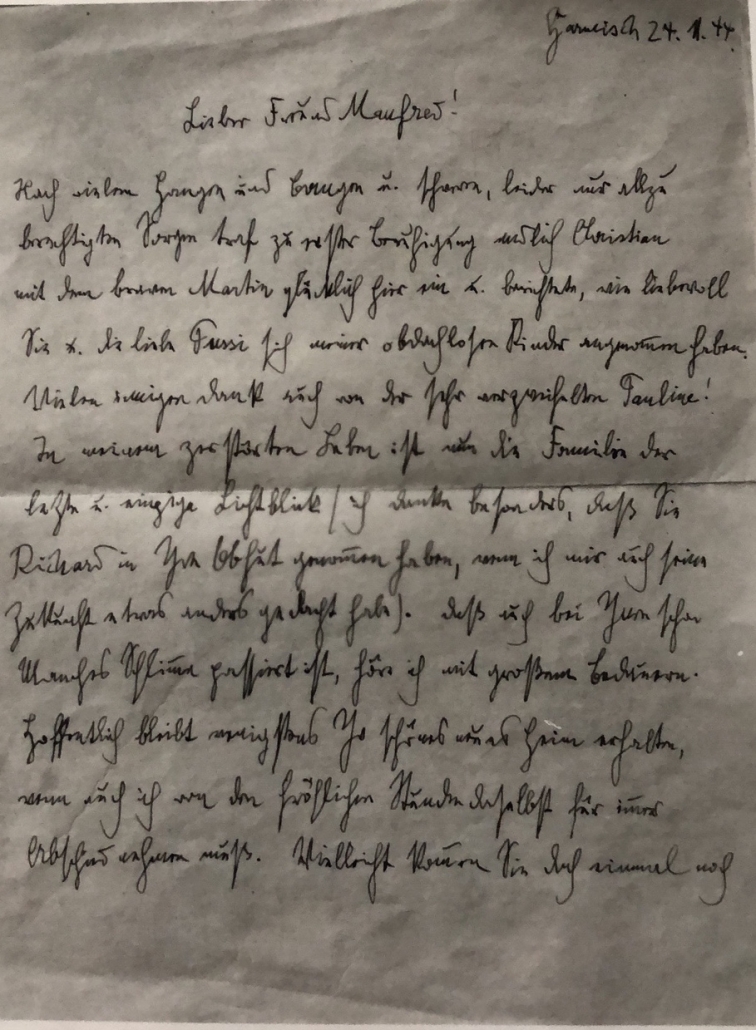 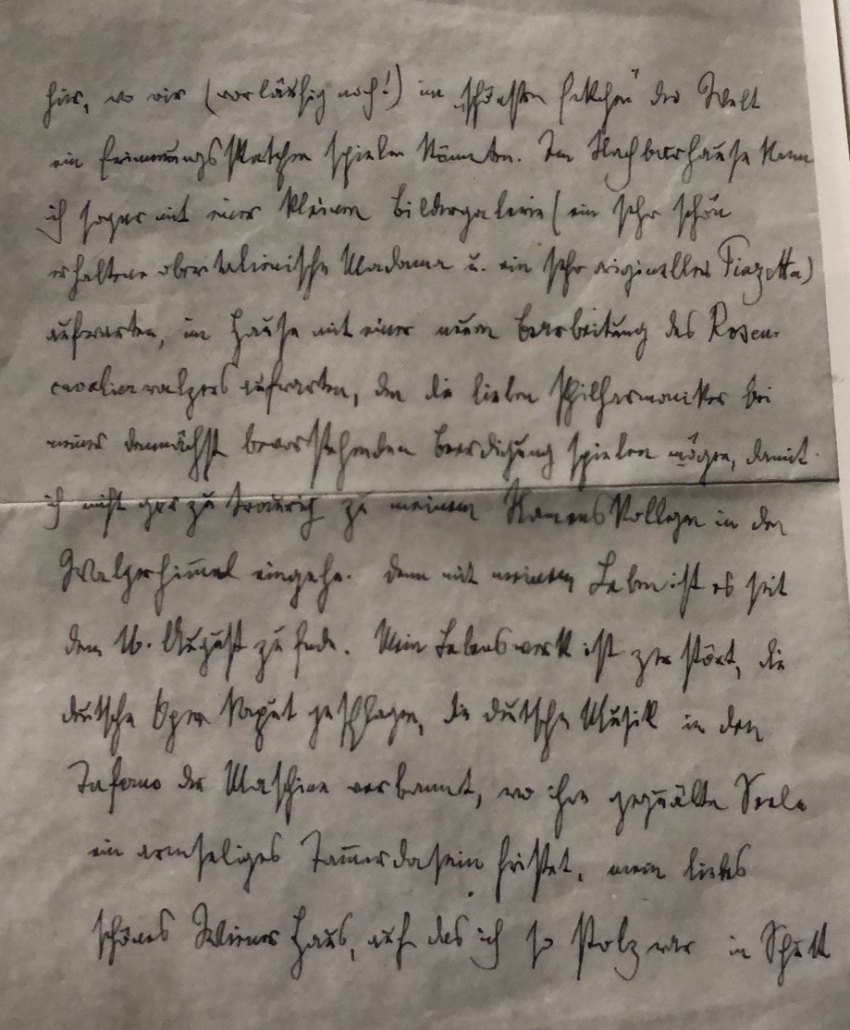 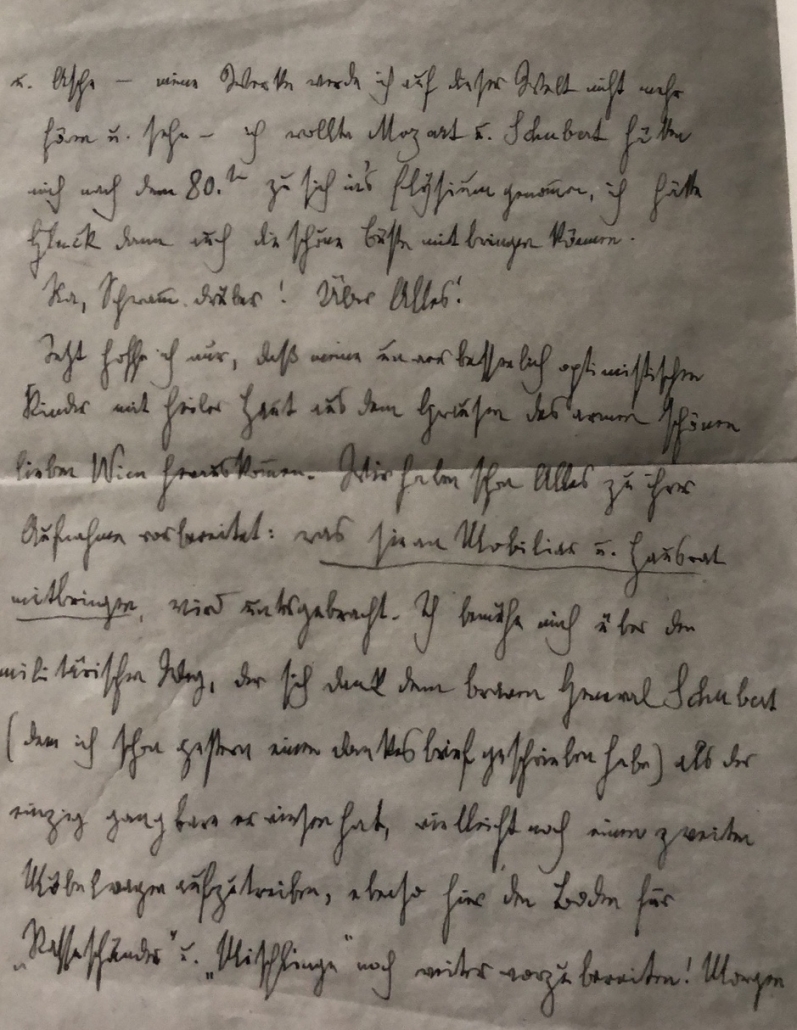 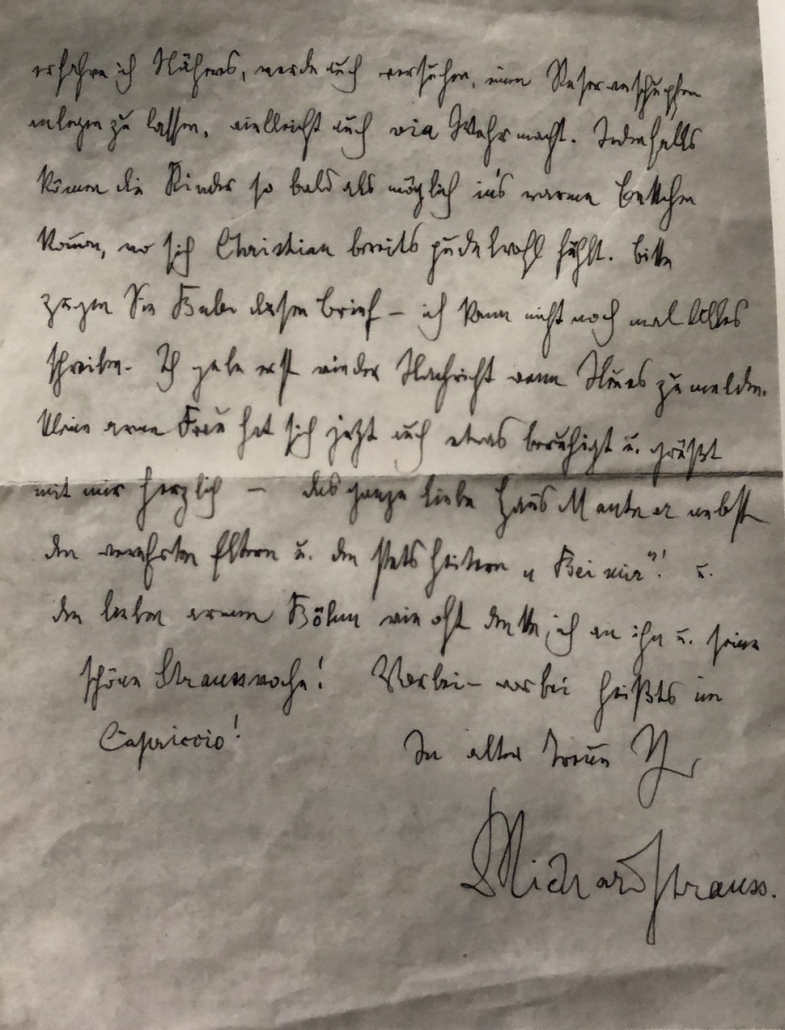